skip to main | skip to sidebar

So, you've got 'real life' pinball players and you've got video gamers.  There are some of us that are familiar with both worlds, but it seems as those many pinball players don't know where to start with current generation video gaming, and many video gamers think pinball died years ago.  Despite this, Pinball FX2 was the highest selling XBox Live game of 2011.  That means that there are lots of video gamers who are interested in playing the silverball, and probably quite a few pinheads who have stepped into the realm of virtual pinball.

Pinball FX2 is currently the premier place to go for pinball on a console.  The team at Zen Pinball (developers of PBFX2) have been regularly adding new tables and content to the game since it's launch in October of 2010.  Also, many of these tables have been ported over to 'Zen Pinball' on the PS3 and in its mobile phone version.  The tables are sold piecemeal for the most part, meaning that you can buy the tables you are interested in, without buying tables you may not like.  I recently noticed that people just don't know where to start, which tables are worth buying, and which ones they should pass on.  As a pinball enthusiast, I find myself supporting the hobby and have purchased all of the tables available currently.  As such, I aim to write this guide to the tables, from the perspective of someone who is familiar with 'real' pinball machines, as well as their virtual counterparts.  It should also be noted, that on many platforms, the tables may be played once as a 'demo' before purchasing the table.

Rome (Similar to 'Medieval Madness' with the trunk from 'Theatre of Magic')
Pros:
- Great art package, including nice DMD animations
- Water ramps!  I wish this could work on a real life pin...
- Very clear inserts and playfield text
- Challenging Skill Shot
- Many shots can be hit from each flipper (ie. backhand)

Cons:
- The ball moves very quickly through the inlanes, may be difficult for new players.
- Compared to the other tables in the 'Core Pack', there is not as much going on with this one.

Pros:
- Nice job retheming Whitewater to a street racing theme
- Sharp design and look, unlike anything in pinball right now
- Great flow... fast and smooth without being overwhelming, but still challenging
- Fun modes and 'vehicle upgrades'

Tips:
- Hit the upper loop and whirlpool shots during multiball to occupy a ball while you focus your shots with the others.

Pros:
- A low scoring game is always refreshing...
- Your mother seems to be keeping score and issuing bonuses
Cons:
- An 'xtreme' sports theme 15 years too late...
- The slingshot plastics are boring.
- Black Knight 2k without the art and theme song just feels dry...

Tips:
- Play one of the many other available tables.

Agents (mirrored version of Star Trek: The Next Generation)

Pros:
- Very cool sharpshooter skill shot
- Pop Bumper animation... A little dude does karate moves.  He changes poses with each pop of the bumpers.  Neat idea...
- The Borg ship returns... as an oil tanker...
- The outlanes are much easier to manage than in STTNG!
- Controller vibration increases as timed modes count down.

Cons:
- 'Picard maneuver' is disabled!  That's THE shot on STTNG.  This time the shot is interrupted by the jet bumpers.
- Many shots lead to 'saucers' that interrupt the flow of the game.
- The slingshot hand 'cannons' are for show only... They do not function in the game.
- Mode selection moves too quickly

Pros:
- Great art design.  Classic style that is as much fun to look at as it is to play.
- Is that Danny Trejo?
- Bomb Bumpers.  FIVE jet bumpers are a lot of fun.
- Based on the best selling flipper pin of all time, The Addams Family.

My gamertag is CallMeSteam if you'd like to compare scores or bump up your wizard score.  Comments, suggestions and corrections are welcomed. 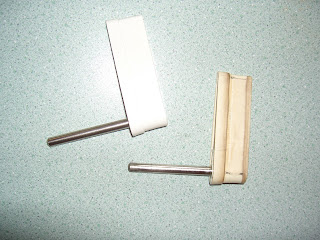 So, I was playing a friends 'Star Trek: The Next Generation' game the other day, and noticed how easy the 'Picard' shot was.  It got me looking at mine, and I thought my upper flipper might need a little adjustment.

I dug in, did my adjusting and then noticed that my lower right flipper might need a little tweak as well.  I adjusted it, but thought... ah... that flipper is a little discolored, I might as well see if I have a spare new flipper on hand.  Sure enough, swapped it out, and saw the real different between a nice, fresh new flipper, and a 20 year old, beat to heck flipper... You can see the difference as well in the above photo.

Then I figured, well... while I'm here, I might as well swap the left flipper out too...

I just played a game with my new flippers, and they look great.  More interestingly, they FEEL better.  Why?  Well, the old flippers were actually cracked!  They both had small, but long cracks along the tips of the flippers.  I don't know if this really made a difference, but the game sure feels differently.  I still need to go back in and swap out the upper right flipper, but she's on her way...

And while I was in there I gave the Borg entry and Borg lock switches a tap in Test Mode to turn off the alarm (it's been a LOOOOONG time since I've hit those shots, and the game noticed!)...  Hey!  I never claimed to be a GOOD player! *cough*

In similar news, I met a couple engineers/pinheads locally recently, and they really got me to nut up a bit and try some tougher fixes.  To step out of my comfort zone a little bit.  I'm taking baby steps, but I'm actually trying to narrow down board issues now.  And thinking a bit more outside of my usual box.  It feels great...

What's going on in your pinworld right now?

ALSO... new pins on the Albuquerque Pinball Map!  Go check it out and see if you have some new pins in your area...
Posted by Don at 3:04 PM 1 comment: